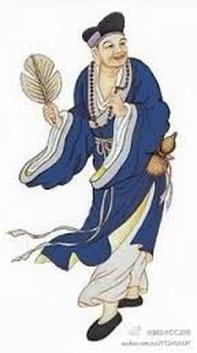 At times, I have also notice the image/picture of a Buddha Ji Gong, who holds a fan and dresses in tattered clothes.  Who is he?
With that in mind, we have to go back in time when Ji Gong Buddha had incarnated into this world. His most well known incarnation took place in China during the Sung dynasty (960-1280 it A.D.). At that time, propagation of the Truth was difficult The law deterred preaching. To overcome this, the Buddha took the form of a dirty monk who behaved crazily. These conditions led the soldiers to disregard him. As a result, he was able to propagate the Truth and performed numerous good deeds. It is said that he had the habit of wine drinking and meat eating. This habit and an ck) unpleasant outward appearance actually( satirized the conduct of certain cultivators. These cultivators possess a wholesome external d appearance and abide by customs and regulations. However, they often have ill intentions within. Ji Gong Buddha may look undesirable outwardly, but inwardly he had the divine qualities. As a matter of fact, it could not be verified whether he had actually taken wine and meat. Such stories could be the fault of those people who were putting up a false front at that time. According to (r) recorded stories, Ji Gong Buddha's elder fellow monk, Kuang Liang personally caught him eating meat in the temple one day. He brought Ji Gong to the head monk and requested that he (Ji Gong) be expelled. Even as he was being brought to the head monk, Ji Gong was seemingly gnawing away at a piece of 'dog meat' The head monk reprimanded him to stop eating it- As Gong Buddha turned to face him, there was only the holy scripture in his hand, and none of the meat he was accused of eating! Being one of the three Buddhas (the others being Maitreya and Yut Hui Bodhisattva) responsible for the Great Harvest, Ji Goq Buddha incarnated as Patriarch Zhang Tian Ran in Shandong Province in 1889. In 1930, he and Patriarch Sun Hui Min incarnation of Yue Hui Bodhisattva) received Mother's holy ordei to transmit the Truth. Patriarch Zhang Tian Ran returned to the Kingdom in 1947. He was bestowed the holy title of Tian- Ran Buddha.

Does the Bible also speak of Ji Gong Buddha? Yes, it does! In the early days, John the Baptist used to perform baptism on the people. However, he had once remarked, "Whereas I baptise you with water for baptism, there is one who comes after me, who is so superior, that I am not fit to carry his sandals. He will baptise you with the Holy Spirit and fire. With the winnowing fan in his hand, he will thoroughly clean the threshing floor. He will store the wheat in the granary and burn the chaff. Jesus further told his disciples, "I have still many things to tell cannot hear them now. When the Spirit of Truth you. but you ones, he will guide you all into the Truth." The only divine being that carries a fan is Ji Gong Buddha. He used to carry a fan whom he was a monk during the Song dynasty. Now this fan is utilized to separate the righteous (wheat) from the evil (chaff- the unwanted husk). The Kingdom looks to the good people to start a new world. It banishes the bad and evils. Jesus came to this world to sow the good seeds. A reaper, Ji Gong' Buddha, harvests the crop when it is ready at end of age. The Buddha baptizes those who have 'cultivated and destined to receive the Truth. Hence, he is the reaper referred to by Jesus.