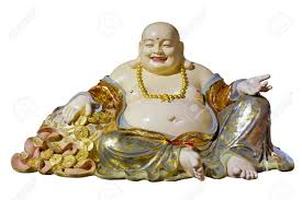 What is the significance of the three lamps on the altar? The central lamp on the altar is the Mother's lamp. It symbolizes the Great Void-the supreme realm of the Kingdom. It is the only place free from the cycle of rebirth/reincarnation, as the Yang and Ying forces do not govern it. When the universe exhausts itself one, the non-realm will continue to exist. Thus, unlike everything else, it is permanent. Mother's lamp further reminds us of Mother and the Kingdom, which is also our original home. It further reminds us not to forget our true self, the soul, which was originally from there. On the other hand, the right and left lamps represent the Yang and Ying respectively. Yang and Ying are the positive and negative cosmic forces. These two forces combined to give rise to the universe and everything in it. The three lamps are also used to signify the start (when they are lighted) and the end (when they are extinguished) of ceremonies.

Why are images usually placed on the altar? As mentioned previously, God is formless and omnipresent. Technically, it is not necessary to have images on the altar. But in practice, most would prefer to have them there. This is because people of different ages, walks of life and spiritual levels come to Mother's Shrine to pay their homage. It is usually difficult for some to find themselves praying without images. Would you want to pray to an empty wall? The altar, with its images, provides a focal point for the congregation to offer its respect. This also applies to churches. A cross, or image of Christ, is usually placed at the front of the hall and everyone faces it when praying. it is important to understand how the Shrine is set up in the first place The Shrine is spiritually connected to the Kingdom through a special ceremony. Thus Buddhas/angels are present in the Shrine to guard it. The altar, with the Central or Mother Lamp, is also the focal point of these buddhas/angels. They are there at the altar, though we are unable to see them with our naked eyes. Similarly, images are also found at homes and temples. These images are not just obtained from the shop and immediately put on the altar for worship. They are usually first taken to the temple to be blessed. What this means is that holy spirits are invited to follow the images home. These holy spirit then place themselves at the image on the altar. Hence, one is actually praying to the holy spirits, and not the images. Last but not least, images of the various holy messengers also remind us to emulate them in the cultivation and propagation of the Truth.

Sometimes I see the image of a laughing bigbelly Buddha. I have been told that he is Maitreya Buddha. Who is he? Maitreya Buddha is the current angel/buddha appointed by Mother to oversee heavenly matters. Just like us, Heaven also has its own affairs and order to maintain. The other divine beings assist Maitreya. The Bible had prophesized the coming of a world saviour. Sakyamuni Buddha had also spoken of a future. Before his return to Nirvana, Shakyamuni Buddha said: "I am not the first Buddha to come to this world. I shall also not be the last Another Buddha will appear in this world in future. He is a supremely enlightened one, endowed with wisdom, the knower o the universe, an incomparable leader of man. He will show you the same eternal Truth which I have taught you. He will proclaim a life perfect and pure. He will be known as Maitreya which means kindness and friendliness." Jesus remarked, "I shall come again. will come like a thief in the night." What did he mean by this? Just like Shakyamuni Buddha, Jesus was hinting the future arrival of Maitreya into the world. However, he had used 'I' to refer Maitreya. Nobody is aware of Maitreya as the people will be looking for him (Jesus) instead. In this respect, he (Maitreya) akin to a thief who comes in the night- nobody knows of it Matthew 24:27 further added, "For like the lightning that flash from the East and shines to the West, so will the coming of the S of Man be." Thus Maitreya will make his first appearance in t East. Already Maitreya is being increasingly acknowledged in the East. Hence the Buddha, Bible and the Koran were all referring to the same saviour. This is not surprising though. The missions of sakyamuni Buddha, Jesus and Prophet Muhammed had been prearranged by the Kingdom. The task of Maitreya to preside over a new world order forms part of this great heavenly arrangement. In fact, Maitreya had incarnated into this world before in India and China. However, the people did not recognize him. He came as Fu Da Shi, and as the Monk with the Cloth Bag, during the South-North Period and Tang Dynasty in China. His last reincarnation was as Lu .Zhong Yi in 1853 in Shandong Province, China. When Patriarch Lu Zhong Yi received the heavenly order to transmit the Truth in 1907, it was the beginning of the transition from the Red to White Period. The essence of the Truth which had been secretly passed among the Patriarchs was for the first time made available to everyone. Patriarch Lu Zhong Yi (Maitreya) returned to the Kingdom in 1925. The image of Maitreya, that we often seen on the altar, is an actual form of one of his ancient incarnations. His laughs remind us to live a happy and worry-free life. This is done by taking problems in Our stride by stomaching them (hence his big belly). As for the future, Maitreya has been decreed to lead a new world order.
Tienshin Temple 626-308-1417