Legend of Guanyin - The compassionate daughter 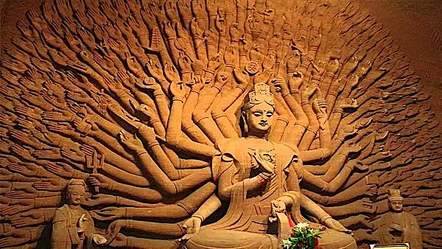 This legend of story will explain why she is often seen with thousands arms and thousands eyes.

Princess Guanyin was named  Miao-Shan .   When she was born, the earth trembled and a wonderful fragrance and flower blossoms sprang up around the land.  Many of the local people said they saw the signs of a holy incarnation on her body.

While the King and queen were amazed by this blessing, unfortunately, they only saw little value in a child who appeared pure and kind.  As Princess Miao-San grew up, she wore only dirty clothes and never did display any urge to adorn herself. Further, she would insist on only a single meal a day.  In her conversations she would talk about how human beings suffer because of their attachment to material objects.   Her parents were very worried about their daughter's weird thoughts.  Her parents proposed that she marries a husband of their choice.   She replied she would only marry if by so doing she would be able to help alleviate the suffering of all mankind.  The King then became angered and forced her to slave away with labor-intensive tasks.

In desperation, the King decided to let her pursue her religious in a nearby monastery.  The King summoned an old and experienced nun to expose the Princess to as much hardship as possible in the monastery, so that she would realize the futility of her desired path.  Miao-Shan did what was told and never complaint.  She managed her time to accomplish all her chores.  Needless to say, all the manual labor she had to undergo at the monastery was insufficient to deter her from pursuing the path of Dharma.   Each day, after supper, she would mediate, studied, and chanting sutra until midnight.

One of her tasks was to collect wood for kitchen and carry water to irrigate the garden around the monastery.  Everyone thought this would be mission-impossible, since the land around the monastery was barren. To everyone's amazement, the garden flourished all seasons long.  Miraculously, a spring welled up out of nowhere next to the kitchen.   At the end, all nuns who were supposed to have reformed her also willingly shared Mia-Shan chore.

When the King heard about these miracles in favor of Mia-Shan, he decided that he was going to kill her. The King ordered his soldier to kill Miao-Shan.  As the soldier approached the monastery gates, Miao-Shan rushed out of the building and eager to embrace her impending death.   She soon kneeled at the stake and the deadly sword been raised.  Then miraculously a blinding thunder rose. Before the soldier could regain their composure, a tiger darted out of the darkness and carried away the swooning girl to safety on a remote island.   She lived there on her own for many years, pursuing a life of religious dedication.

It was not long before his karma caught up with the King, and he fell sick with jaundice. He was restless for days on end, finding no rest even in sleep. The disease spread all over his body and the best doctors throughout the land were unable to cure him.   All doctors believed he would certainly die soon.  As he was about to die, a monk came to visit the King.  The monk told the King he could cure the illness, but he would have to grind up the arms and eyes of a person free from hatred to make the medicine.   In addition, if the person is found, one would willingly consent to give his or her arms and eyes without the slightest anger or resentment.  The monk added: "The remedies made of these potent ingredients will surely relieve you from your suffering."

The King thought this was impossible.   "Where alas will I find such a compassionate being?” the King asked.   However, the monk assured him that there was a Bodhisattva living in the king's domain who would gladly surrender those items if asked.
"In this very land," said the monk. "Go southwest in your dominion, on top of the mountain there is a hermit who possesses all the characteristics which are necessary for your healing."

The King sent a deputy to find this unknown Bodhisattva. When the deputy made the request, Miao-Shan gladly cut out her eyes and severed her arms. The deputy returned and the monk made the medicine. The King instantly recovered. When the King thanked the monk; he chastised the King by saying, "You should thank the one who gave her eyes and arms." Suddenly, the monk disappeared. The king believed this was divine intervention.  The King hurried with Queen to pay homage to the one who had so miraculously saved his life. After bowing low before the mutilated form, as soon as they raised their heads they let out a shriek of astonished horror; the hermit's true identity lay bare before them. She was none other than their youngest daughter Miao Shan. Realizing what she had done for him, despite all that he had done to her, the king fell prostrate upon the floor and asked for forgiveness. Overcome with emotion, the parents embraced her and the father said: "I am so evil that I have caused my own daughter terrible suffering." Miao Shan replied, "Knowing my father's love, I was honored to be able to repay him with my arms and eyes.  I have suffered no pain.  Having given up these human eyes, I shall see with diamond eyes. Having yielded the mortal arms, I shall receive golden arms. If my calling is true all this will follow."

With eyes full of tears and hearts full of shame, the family gathered to hug Miao-Shan.   Then, auspicious clouds formed around Miao-Shan. The earth began to tremble and thousands of blossoms floated down from sky. A holy manifestation of the Thousand Eyes and Thousand Arms appeared hovering in the air.    When the fog cleared Miao-Shan was no longer there.
To honor Princess Miao-Shan, the King returned to his palace and ordered a statue to be made of her.  The Royal family also built a shrine where Miao-Shan was lastly seen, which is known as Fragrant Mountain.
back
Tienshin Temple 626-308-1417