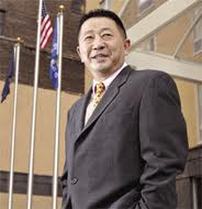 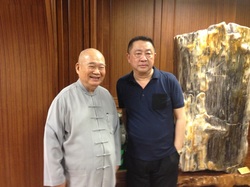 On October 2, 2013, the generous Philanthropist, Chairman Chang, visited the San Wei Tian Tai Mountain Tao environment in Kaohsiung, Taiwan.  All Tao members and Elder Lin wholeheartedly welcomed his arrival.  Elder Lin expressed: "The blessings of wealth and money are God's plan for us to care for others.”  10 years ago, since Master Yao donated the land to build Shen Wei Tian Tai Shan Tao Environment, numerous people have sought to have divine affinities with the Tao, and countless people have learned and practiced the Tao.   Recently, we see several billionaires have donated their wealth to the public for promote the welfare of other people and building a better community.  The philanthropic giving is a significant moral contribution to our society.  Chairman Chang's bestowal of land to Tanshen Temple will benefit many people whose life will later be changed.  His precious and benevolent deed has immeasurable merit and virtue; the selfless manner will bring immeasurable joy and will lead to accomplishing anything from perspective of life.  Chairman Chang is indeed the most extraordinary mentor to all Tao members of the Bao Guan Jan Der group.