The Elephant and His Old Blind Mother 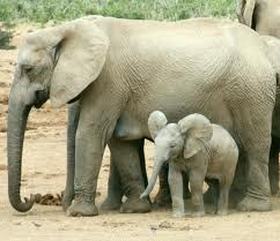 Long ago, in the hills of the Himalayas near a lotus pool, the Buddha was once born as a baby elephant. He was a magnificent elephant, pure white with feet and face with the color of coral. His trunk gleamed like a silver rope and his ivory tusks curled up in a long arc.

He followed his mother everywhere. She plucked the tenderest leaves and sweetest mangoes from the tall trees and gave them to him. "First you, then me," she said. She bathed him in the cool lotus pool among the fragrant flowers. Drawing the sparkling water up in her trunk, she sprayed him over the top of his head and back until he shone. Then filling his trunk with water, he took careful aim and squirted a perfect geyser right between his mother's eyes. Without blinking, she squirted him back. And back and forth, they gleefully squirted and splashed each other. Splash! Splash!

Then they rested in the soft muck with their trunks curled together. In the deep shadows of afternoon, the mother elephant rested in the shade of a rose-apple tree and watched her son romp and frolic with the other baby elephants.
The little elephant grew and grew until he was the tallest and strongest young bull in the herd. And while he grew taller and stronger, his mother grew older and older. Her tusks were yellow and broken and in time she became blind. The young elephant plucked the tenderest leaves and sweetest mangoes from the tall trees and gave them to his dear old blind mother. "First you, then me," he said.

He bathed her in the cool lotus pool among the fragrant flowers. Drawing the sparkling water up in his trunk, he sprayed her over the top of her head and back until she shone. Then they rested in the soft muck with their trunks curled together. In the deep shadows of afternoon, the young elephant guided his mother to the shade of a rose-apple tree. Then he went roaming with the other elephants. One day a king was hunting and spied the beautiful white elephant. "What a splendid animal! I must have him to ride upon!" So the king captured the elephant and put him in the royal stable. He adorned him with silk and jewels and garlands of lotus flowers. He gave him sweet grass and juicy plums and filled his trough with pure water.
But the young elephant would not eat or drink. He wept and wept, growing thinner each day. "Noble elephant," said the king, "I adorn you with silk and jewels. I give you the finest food and the purest water, yet you do not eat or drink. What will please you?" The young elephant said, "Silk and jewels, food and drink do not make me happy. My blind old mother is alone in the forest with no one to care for her. Though I may die, I will take no food or water until I give some to her first."

The king said, "Never have I seen such kindness, not even among humans. It is not right to keep this young elephant in chains." Free, the young elephant raced through the hills looking for his mother. He found her by the lotus pool. There she lay in the mud, too weak to move. With tears in his eyes, he filled his trunk with water and sprayed the top of her head and back until she shone. "Is it raining?" she asked. "Or has my son returned to me?" "It is your very own son!" he cried. "The king has set me free!" As he washed her eyes, a miracle happened. Her sight returned. "May the king rejoice today as I rejoice at seeing my son again!" she said.

The young elephant then plucked the tenderest leaves and sweetest mangoes from a tree and gave them to her. "First you, then me."

This is the story about a elephant. The story not only tells about the animal. It gives a good lesson that how a help is rewarded with betrayal if you are not aware.

In this story it is also well mentioned that how a mother sacrifies for her son and how a son sacrifies for his mother. The love between a son and his mother has been very well defined. We should understand how to take care of mother and father.
Home
Tienshin Temple 626-308-1417